Willowfield Harriers hosted the Joe Seeley Cup 2009. This race is a 10k circuit which laps Ormeau park 3.5 times. The race started on ormeau embankment with a record for entries. I got into the pack and when the whistle blew for the start we took off. 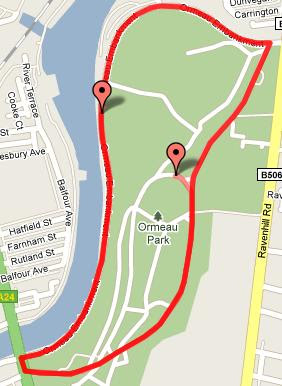 A tight pack of runners jostling for position. Bumping and side stepping ensued until the pack spread out. There is always a few who don’t listen to the advice of keeping the start clear for faster runners. I don’t understand why people want to get to the front to then keep people back by running slowly. Belfast Marathon was the same with walkers stuck at the front with runners having to sidestep to avoid them causing a chain reaction down the pack. I wasn’t running for a win but it is still annoying when your rhythm is upset by some idiot who gets in the way. (And breathe rant over!)

We ran along the embankment towards the Ormeau bridge turning left back into the park. I was made aware of a bollard on this corner before the race. It was right in the middle of the path on a blind corner. I missed it but the guy in front took a knock to the knee trying to avoid it. There was a slight up hill section through the park. Nothing more than a bump really but got tougher as the race went on. The path then flattened out before a slight downhill to the corner gates that lead back onto the embankment. Turning left we now had a 1.5km flat road run along the embankment from Ravenhill road to the ormeau bridge. As we got back onto this section you could feel the pack was opening up a bit. Passing the gates to the Ozone leisure centre and crossing the mats for 1 lap complete.

I had more space to run and was feeling really comfortable. Breathing was o.k. and the legs were feeling good. I don’t run to a watch and normally let my body determine the pace I run. I wanted to push myself on this race to get an official 10k time. Keeping this in mind I didn’t want to burn myself out with pushing too hard.

On the second lap I got caught up in a bit of a push for position. I lost concentration on my own running and got into a battle with a group of 5 runners. We exchanged places several times with one guy coming to the front and seeming to slow down. This really got to me and when he cut across in front of me when I tried to pass that was the final straw. I cut back to the outside and took off past him. I could hear someone coming with me and it helped me keep a fast pace along the embankment. I really pushed to get away from this guy. Turning left into the park I had a look back to see none of the original group anywhere near me. On the park section I started to feel bad. Why did I just push so hard to get away from someone? Why was I worried about someone around me? Why was I not concentrating on my own race? These where the things going through my head. Then I it clicked this is a race. Yes I am only trying to get a time for me but in doing so I might have to use others to get me around. These thoughts were like a switch flipped from the sore chest to feeling comfortable again. I kept to a steady pace which I felt I could continue to the end. The last lap was a comfortable one with me lifting the pace anytime I was conscious of me tiring and slowing. Into the park again and as it was the last time I would be on the hill (Bump) I thought it rude not to attack it. I knew there wasn’t far to go and pushed hard picking up a few places. I crossed the line with mixed feelings. From I am feeling o.k. why didn’t I push harder? To thank god that is finished. To I nearly blew up on lap two what was all that about? Then I just took a deep breath and thought mission accomplished my first proper 10k race. I was happy to finish so strong and can use this race to help in the future.