Race morning the sky is blue and sun is shinning. There is a slight breeze but nothing to worry about at this stage. The atmosphere at the Race HQ in Portballintrae was great. The athletes, families and general public chatted in anticipation of the start of the race. When I say start I mean start of our race the Half Marathon. The Ultra Marathon was already well underway having started just after 7am on Portstewart strand. The Marathon also had just set off and with more competitors arriving to register for the half and 10k events the place was a hive of activity.

I haven’t been running too much this year. Most runs have been slow short distance runs. I wasn’t going to take part in the event through lack of training. When I heard the closing date I decided I would at least do the half. There is just something about this event that you can’t say no to. The location and route speak for itself with some of the best scenery in the world. The organisation and team behind the event is another reason for picking this event. With 26extreme you always know you are going to have a well organised event. Having taken part in the full marathon last year I did have a bit of sadness at not doing it again this year. 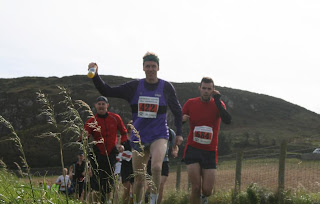 The Half Marathon.
We all boarded the busses and travelled over to larrybane headland. The half started in the old disused quarry below the National trust car park. We all jogged down to the quarry and had a bit of a stretch and warm up. Some Marathon runners and Ultra runners were coming through at this stage and I tried to shout as much encouragement as I could. I know just how much of a boost it can give to hear a few shouts. I met a friend who was running the Ultra and he was in good form and seemed to be going well. As he headed of to complete the last 13 miles of the 39 I began to think I am in no position to complain about pain or suffering during the half. It was added motivation for me to push on having witnessed the men and woman competing in the ultra. A great achievement for all involved. 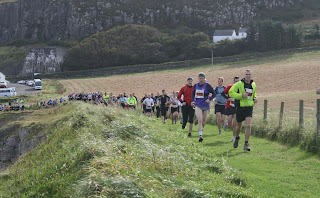 Ian got us all lined up for the start at the back of the quarry. With a brief course description and a Mr Motivator style group cheer to see us off the half was underway. We started through the quarry and up a concrete lane turning right along the top of the quarry sides onto a single track. This was a small grassy path that would take us to ballintoy harbour. The start was fast as many of us wanted to get off the single track and any steps or gates that might hold up the pack. The track was wider than anticipated and passing was easy if it was needed. One small gate at the end of the trail could have been a potential to slow things down but thankfully the group I was in all got through without slowing down. A short road section down hill to the harbour then back onto single track. I was keeping a steady pace and already well warmed up despite the breeze on the open headland. Less than a mile in and I had to take off the windstopper jacket. I kept moving as I tied it around my waist. Also the water bottle in my back pocket got discarded into the first bin I seen. Stupid idea taking it in the back pockets and one I won’t make again. 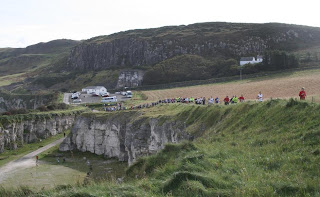 The tide was out far enough to make a dry path across to whitepark bay strand. Last year I crossed the same section on the outward journey and the way home up to my knees in water. It was refreshing having ran 13 miles but I am glad I was dry just starting this time. The beach crossing was very soft much softer than I remember it last year. Or maybe it was a case of being already warmed up last year. I pushed on regardless and just got the head down. The end of the beach had a rocky section that took us over to the trail at portbradden. This was a slight change on last year and meant we didn’t have to run the road section. I think this addition was a much better option and made it much more of the off road event that attracts us competitors. Maybe not to everyone’s liking but definitely to mine. After portbradden there is a lovely section of single track through the cave and then some trick rocky sections an eye on the ground at all times made for a safe crossing. We had a few steps to cross and a rocky beach that lead to Duseverick Harbour. Through the harbour and then a very short uphill road section turning right over some steps back onto the single track trails. This section was grassy but still caution had to be taken. The ground is grazed by cattle and with hoof prints in the grass it was challenging at times. I felt really good and tried to keep the pace fast. I could see a wet section ahead and instead of slowing I jumped across it. I landed a bit awkward as my foot sank into a mucky hole. I twisted my ankle and could feel a bit of pain but just kept pushing on. I eventually ran the pain off and really glad I continued rather than stopping to see if I had damaged anything.

We passed Dunseverick Castle and continued around the trail to the cliff paths that lead to the causeway. The trail from this point is very smooth with the exception of a few rocky parts. This was the time to push if I could push at all. I was keeping a good pace and faster than I had done in any training run. With this in mind I didn’t want to push to hard and cramp or burn up. The headlands were passing by, topping one I could see we were at Portmoon the location of the 10k Start. There was a water station and tent in the field. I felt I didn’t need any water at this stage so pushed on. Another set of steps over the fence and onto the cliff paths again. I knew we had a lot of up and down sections and the series of steps that took us around the causeway headlands. On I pushed with some very strong headwinds on the open higher sections. I was loving the scenery, running well and taking in as much as I could without slowing. The steps were definitely a lot easier than this stage last year. I was running up the steps without easing to much and pushing on downhill sections. I got to the steps that caused me so much bother last year and just breezed up them. I did start to feel the legs tighten at this stage. I kept thinking of the ultra runners and how my pain would be nothing in comparison. The causeway stones were in sight and with only Runkerry headland and portballintrae beach left I could feel the end was close. I took on a few glasses of water and some jelly sweets at the visitor centre. Some shouts of encouragement from the tourists were a nice boost for me and I picked up the pace again. Runkerry Headland was breezy in places but knowing the finish was so close I just got the head down and kept battering on. The trail at runkerry seemed to go past in a flash and soon I was into the sandhills at the back of portballintrae beach.

The railway line at the back of the beach was the final stretch. There is a smooth surfaced path that follows the railway lines. I was giving it legs on this and could really feel it to. A right turn onto the sandy trail then the boardwalk that lead to Bush River bridge. Crossing the bridge I give it one last push up to the finish line. I finished in 1hour 55mins and felt great.

Again the Race HQ was buzzing with stories of competitor’s good points and bad points. The good points definitely out weigh the bad points and for that reason this will definitely be an annual event on my calendar. A big congratulations must go to all who took part but specially to the Ultra runners on what truly was an amazing effort.

A video from Andy Yoong showing the Causeway Marathon 2010

Big thanks to 26Extreme, The National Trust and all the helpers on the day.
Posted by Michael Regan at 05:23