I arrived at the already very busy car park at 7pm. There was a great atmosphere and a lot of new faces from last years series. The 26extreme team had everything set up and ready. The event HQ was a big tent with all the usual suspects making registration a fast process. I got my chip and number and headed off for a warm up. Thankfully the rain had stopped and it was a really mild night. When I finished my warm up I went to hear the race briefing. 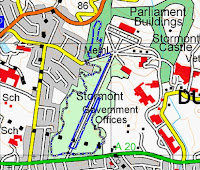 Ian welcomed everyone to the 2nd 26extreme Winter Series Race 1. He told us the course which was a clockwise lap of the trails around stormont estate. The loop was 5km and we would do this twice. The trails were mainly hard packed gravel through trees with one section on the tarmac road running down the hill. Ian let us know there would be marshals on hand but all junctions would be tapped of and to just stick to the paths. We gathered at the start line and the race was underway. 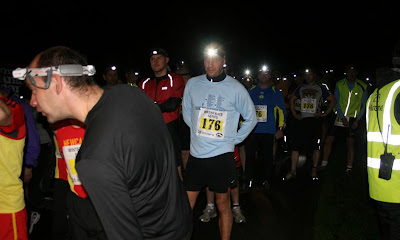 I was around the front and sat with the lead group as we left the start line. We crossed the road at the main gates to stormont and into the trees at the other side. The trail was very wet with puddles dotted around the flatter sections. 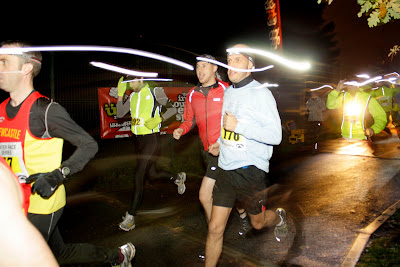 The trail surface was hard packed gravel with only a few soft sections where water had been laying. This section was proper dark but everyone’s head torches lit the place up well. The trail took us along the left side of the grounds climbing all the time. There was a few sharp hills along this side and it had already started to open the pack. I eased up a bit because all the advice I had given others about not getting caught up in the fast pace at the start had only hit home to myself. I was doing just that looking at the front runners pushing myself out of my comfort zone. I started to run my own race and let the lead group go. Lets be honest I was never going to sit with them for the race let alone this lap. Crossing the road at the side entrance we rejoined the trail and headed up to the top bridge. Finally a good descent to get the breathing back and try and open the legs up a bit. We followed the trail down to the road turning left onto the tarmac. Rowan from 26extreme was out on the course giving everyone a cheer at this point. There was a short climb to the roundabout then a right turn and down the main road. 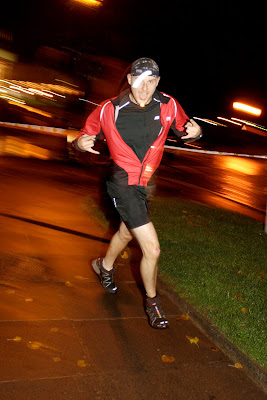 UBERDOG magazine was on hand with some words of encouragement and also taking photos of us as we passed. A wave to the legend that is Robert from Uberdog and down the hill I went. The pace picked up again on the down hill. Good light and the descent made this section fast for most. We crossed the road and joined the trail again heading into the right of the grounds. This took us out along side the football pitches and back through another dark wooded section to the start finish. 1 Lap complete 00:20:59mins.

Ian from 26extreme was also cheering everyone at the halfway point and taking photos as we passed the chip timing station. I got a few words of encouragement from a mate who had come down to see the race which helped me pick up the pace again. I pushed on feeling o.k. apart from my breathing. My legs felt o.k. and I didn’t feel tired at this point. The hill this time did feel a lot longer. I knew I wasn’t as quick as I had done the first lap but I didn’t want to ease up. The closer to the top of the hill I could hear a few people catch me as I had slowed right down. Rounding the bridge for the second time I knew I had to make up some lost ground. 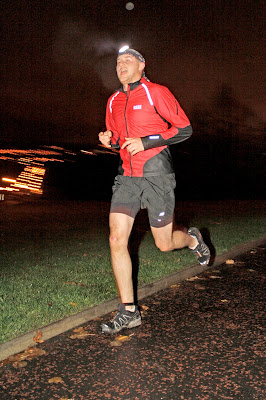 I got my head back sucking in as much air as I could and took off down the hill. I had my eyes closed as the light from the head torch reflected off the moisture from my breath making it really hard to see. I knew the path was straight and just kept going taking the odd look to see if I was still on course. Thankfully I was o.k. coming out of the trees and onto the road section. I passed a few people that had passed me on the climb and kept a steady pace going into the last wooded section. There was a few more in my sights and I tried to push on to get passed them before the trail narrowed. Some I got passed some I didn’t as everyone was pushing for the line. Rounding the last corner three abreast we took off for the line. One passed me and I managed to stay ahead of the other guy. Second lap was a much slower 00:23:35mins with a total time of 00:44:34mins. A fair bit of my PB for 10km but a tougher course than I had anticipated.

Thanks to Rowan and Ian at 26extreme for another excellent event. The new course was good and as always the organisation was top class. Thanks also to Surf Mountain for the discount vouchers and also Uberdog Magazine for covering the event and for supplying the photos above.

Next round is Thursday 11th November in Killbroney forest park, Rostrevor.