Race 4 Tollymore 10km
Thursday 25th November
While out on the bike on Sunday I had a bit of a coming together with a pavement. I landed heavily on my hip. It was inevitable it would be the same side I injured in a motorbike crash in May. I took a light jog at lunch time on Wednesday to see if I was o.k. to run on Thursday night. Running on the roads at a slow pace my leg felt o.k. Sore afterwards but I didn’t feel it was too bad to miss race 4. 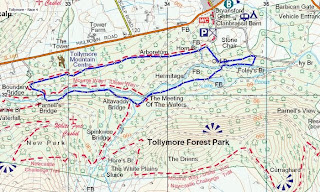 I arrived early and had a “warm up” It was difficult in the cold evening to get anywhere near warm. Conditions were windy, rain and temperatures dropping down to near freezing. It did stop raining during the race and when we got moving it was a lovely night for a run. Event HQ was set up on the green below the main car park. The music was playing as the 54 competitors warmed up on the tracks and the green at the HQ. Race briefing from Ian was short and to the point as he didn’t want to keep us hanging about in the cold. 2 laps on fire roads with one big climb up a grassy hill just before the finish line.

I started well and despite a slight pain in my hip I felt I was o.k. That was until I had past the Mountain centre and started to descend. The pressure on the hip at race pace was just too much. With every stride I could feel it getting worse. After Parnell Bridge I slowed a lot. Trying to vary the way I landed on the left side. Nothing seemed to ease the pain and I took the decision to pull up after one lap. I have other races coming up soon and want to fully recover rather than do permanent damage.

The course was brilliant and I was very disappointed not to be able to continue. The section along the river was tight and twisty. The fire roads were solid and easy under foot. The grassy hill was steep and soft under foot but not to long. Some seemed to take it in their stride while others slowed to a crawl tackling this section.

Another trio from Newcastle AC took to the podium with 1st Deon McNeilly, 2nd Eamon McCrickard and 3rd Brendan Quail. Well done to them and all who took part.

Next race is a return to Castlewellan for a similar loop around the Lake course. Thursday 2nd December.
Posted by Michael Regan at 05:38