Race 3 Castlewellan 10km
Thursday 18th November
The weather has been terrible over the last few days. It had been raining most of the day but thankfully the afternoon had started to dry up. The drive to Castlewellan was a nightmare. Motorway traffic jams out of Belfast then drivers deciding to brake at every puddle. Despite the drive I got there at 6:30pm early enough to get a good warm up and a chat to Rowan and Ian. 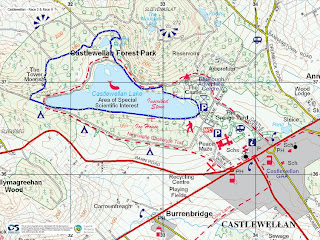 There were some new faces and first timers. Questions being asked about the route, if there was any hills etc. The buzz of excitement was building around the lake car park as the start loomed closer. 26Extreme DJ was on hand with music that made the warm up area look and sound more like a disco with people bouncing to the beat. The music seemed to make people a lot more relaxed. There were so many smiling faces for a cold November Night. We got a race briefing from Ian and headed for the start line.

We lined up with our backs to the castle for the start. We would be running clockwise around the lake. It was a fairly flat course with one climb at the far end of the lake. The trail surface at the start was smooth gravel. This was very wet with puddles all along the lake side. The start was fast and a big group at the front kept the pace quick along the flat trail on the banks of the lake. I decided to run things different in this race. I would start middle of the group and hope to pick up positions rather than loose them in the second lap. I quickly got into a good rhythm speed and breathing seemed good. At the end of the lake the path lead onto fire road and we started to climb. As we turned right it got a bit steeper. I think it felt steeper because the surface was very soft. The fire road had a new surface of gravel. The heavy rain had pushed the gravel to the right side with the water running down the left. The left was a harder surface but this meant getting the feet even wetter. The right was energy sapping and after twice turning on my ankle I decided to run on the left. The climb wasn’t to long and once at the top there was a descent that had to be taken with caution. The heavy wind had branches and leaves on the fire road this coupled with the wet weather made the surface very soft and slippery. The run along this side of the lake seemed to pass quickly. I was in a group of about 7 along this side. The pace kept high with everyone running well and jockeying for position. We left the fire road and onto a tarmac path to cross the line 1 lap completed 00:22:29

I was feeling good going into the second lap and picked up the pace. I passed a few runners along this section giving me a boost. This was definitely a better feeling than getting passed when I was tiring. On the first part of the hill I seemed to fly passed one guy. “keep er lit” he shouted, which I did. I rounded the corner staying to the left of the fire road and up the harder wetter side. I was going well but could feel I was slowing. At the top I felt I had gone as quickly as I had the first lap which was encouraging rather than loosing too much time on the hill. As I tried to get the breathing calmed again after the hill I heard a runner catch up with me. “Not far to go keep it going, your doing well” he said. Not far to go is a great sound to hear when running. I was aware of more runners not to far behind me and my goal was to finish in front of them all. I didn’t want anyone passing me. I picked up the pace again and pushed hard along the lake. When we joined the tarmac path I give it one last push crossing the line and completing this lap 00:23:05 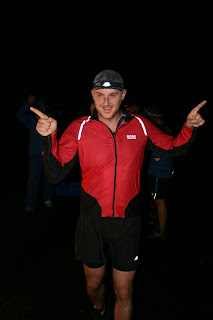 Another great run with 68 competitors taking part. Thanks again to Rowan and Ian @26extreme, Champion Chip Ireland timing, all the helpers and the DJ for lifting the spirits at the warm up are. It’s wonderful what a bit of loud music can do for the mood.

See you all in Tollymore for Race 4 Thursday 25th November
http://26extreme.com/
Posted by Michael Regan at 02:33